One of the leaders of al-Qaeda listed Hungary as one of the main enemies of Islam. Szilvia Peremiczky believes that Hungary is not in the position to assume that all is well. “We need to stop sidetracking and realize that we are in the middle of a sort of war of religion where Iraq and Afghanistan are only two of the many locations.”

Gábor T. Szántó’s essay, The Inheritance examines the characteristics of second and third generation of Holocaust survivors in Hungary. The survivors’ anxieties are felt and passed on by their descendants as well: they are facing numerous psychic and psychosomatic prob­lems. The memorial events held by the community do not make up for the individual’s task of facing his experi­ence. It is only through personal realization that they are able to recreate their identity.

We publish an interview with János Dési, a wellknown Hungarian Jewish journalist and reporter. He claims: “I meant to write about politics, and not to actu ally do it. To be able to do politics, different talents would be necessary. It was good to feel at the end of the eighties that we were allowed to discuss more and more subjects in public.”

Tamás Halász remembers László Kabos the comedian who died recently. „His story was a particular, exciting, poignant theatre tale… he left as „the last buffalo”, after a happy life lived with never ending serenity despite being ignored. He left the stage and also a whole period behind.”….

Nelli Koltai’s essay celebrates the 75 years old Nobel laureate Hungarian writer Imre Kertész whose novel, Sorstalanság (Fateless), is an existentialist work, and is about more than the Holocaust.

Pál Várnai „My Encounters with my Jewishness ” is an autobiographical work about what his being Jewish meant for him from his childhood to his life in Canada. He writes: ”Yet, I am afraid of Jewish communities just as much as of any other communities. ” 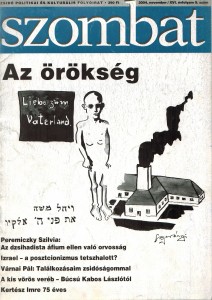 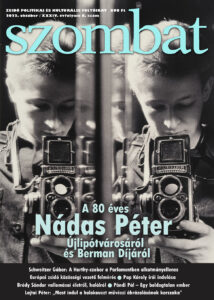