In his editorial János Gadó writes about a conference on anti-Semitism held in Berlin. “The majority of European politicians do not really want to hear the message conveyed by the Jewish partic­ipants in this conference on anti-Semitism, and that is: Today’s anti-Semitism is disguised as being against Israel, and it takes its roots in the Islamic world, with the communities of Arabic immi­grants in Europe as its most aggressive representatives. Tensions are increasing as this new form of anti-Semitism continues to spread and European Jews are increasingly outspoken when listing their grievances, Europe is cursing the old type of anti-Semitism while “criticizing Israel” has become a semi-official policy – and this schizophrenic machinery keeps wildly rolling along.

A Holocaust survivor, Gábor Deutsch wrote a letter to Szombat criticizing our Editor-in-Chief Gábor T. Szántó who in his editor­ial in our March issue claimed that the official Jewish community is not capable of looking at the Holocaust from a historical per­spective because – as well as considering the suffering – this tragedy has meant they are also searching for a political identity within the Holocaust. “I know we are in the way of a lot of people,” states Deutsch in his letter reproaching Szántó for being insensitive. The editor Szántó stated in his reply, “What Mr. Deutsch is really complaining about is my open criticism of the Jewish administra­tion,” and went on to offer an analysis of the tensions between the first and second generation of Jews after the Holocaust.

At the same time as the Budapest Holocaust Museum was opened a renovated exhibition in one of the barracks of Auschwitz was shown, bringing forth by display the destruction of Hungarian Jews. László Rajk, the director of the exhibit The Betrayed Citizen told Szombat. “With each segment of the display we tried to show how people were brought to death in only a few days or weeks. This is why on one picture you can see people on holiday on the Adriatic coast while the next photo shows them under the shower in Auschwitz.”

Attila Novák‘s reports on The March of the Living in which par­ticipants walked the distance from the gate with “Arbeit macht frei” written above it, to the ruins of the one-time crematorium to demonstrate that Jews did manage to survive the destruction.

Szilvia Peremiczky summed up the main lectures delivered at the conference organized on the 60th anniversary of the Holocaust. Péter Feldmájer, vice president of the Alliance of Jewish Communities in Hungary (Mazsihisz) claims that the tensions around the opening of the Holocaust Museum in Budapest show how the role of Mazsihisz has diminished within the community. In an interview with Szombat András Heisler, president of Mazsihisz stressed that the new constitution accepted by the assembly in May was a significant step towards a more democratic and more con­trollable leadership.

In our section on media issues we discuss anti-Israeli exaggera­tions and distortions in the Hungarian press. One of the “gems” among these was an article on May 4 in the daily Népszava report­ing on the massacre of a pregnant Israeli woman and her four chil­dren: “The extremists of Zionism were actually helped by the extremists on the other side.”

Two well-known Hungarian musicians, flutist Eszter Horgas and singer Eszter Bíró have a new performance, which is an adap­tation of Purim under the title Book of Esthers. Zsófia Rick has interviewed the two artists. 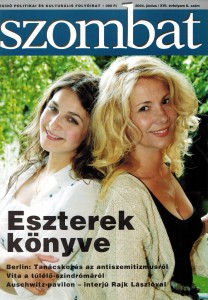