“New anti-Semitism” is in the focus of this month’s issue. This is a politically correct ideology, only critical towards Zionism and Israel. In the introduction Martin Luther King is quoted: “When people criticize Zionism, they mean Jews – this is God’s own truth”. We publish the translation of two studies, one by Per Ahlmark, ex-deputy prime minister of Sweden, the other one by professor Meir Litvak. The original version of both studies was published by the Vidal Sassoon Center for the Study of Anti-Semitism, in 2002. „The charge of mass murder in Jenin” is the title of the article writ­ten by János Gadó, dealing with the response of the media to ..Operation Defensive Shield” led by the Israeli army in April 2002. He sums up the case as: “First the image of the ‘freedom fighter’ (Arafat) grew larger than ever before; then the charge of mass murder and genocide came from the clouds of dust above the refugee camp in Jenin; then the siege of the Church of nativity evoked – through some vague associations – the already silenced charge of Christ killing, which only the ‘bravest’ dared to speak about.” Gábor T. Szántó states in his article under the title „New anti-Semitism”: “From the perspective of a number of prejudices Israel is just as much of a symbol and a scapegoat as Jews used to be, except that in the Holocaust-awareness of the Euro-Atlantic world Jews just can­not become the target of these any more. Anti-cap­italist, anti-Western forces – both form the political right and left – have found a common ground, or more precisely a common language in this new, refined form of political anti-Semitism.”

We publish an interview with András Heisler, recently elected as president of the Official Jewish Community. He was asked about why there are so few members in the community, not many young people among them, and why is Mazsihisz (the Official Jewish Community) incapable of appeal­ing to Jewish intellectuals. His reply was: “Some of these critical remarks are right. Though for many years now, Mazsihisz has been trying to get in con­tact with Jews outside the community, trying to find a way to reach the intellectuals as well. We have not been greatly successful in this. We need to find out why this is, and I am convinced that when we achieve results in other fields, many more Jews will turn to Mazsihisz.”

János Sziklai, lawyer disputes László Seres‘s argument (published in this year’s February issue of Szombat), who – as a dedicated liberal – claims that anti-Semitic discourse need not be classified as a criminal offense. Sziklai’s view is different: “I cannot understand why „it is not a good idea” to adapt our penal code to the accepted standards within the EU by creating legal tools already exist­ing in some countries of the European Union”.

“Esther’s bag” our women’s section reports on the charity ball organized by W1ZO (Women’s International Zionist Organization). This is a tradi­tion they are trying to revive, because the Jewish middle class has only been present openly in the past ten years. The section also covers a round­table discussion with the participation of women who have an important public role, and who thus may be able to influence the public opinion for the benefit of women. Israel’s ambassador to Hungary, Judith Varnai-Shorer and Katalin Lévai (since appointed as Minister for Equal Opportunities) also took part in the meeting.

Before the start of university entrance exams we offer an overview of those Jewish schools in Budapest where students study for their maturity exams. Ms. Anna Szeszler, head of the Lauder Yavneh Jewish Community School stressed that in their school good results and a stressfree atmos­phere are compatible. Ms. Gáborné Réz director of the Sándor Scheiber School run by the Official Jewish Community, among other things men­tioned that one of their main goals is to get more graduates from the school getting into university education with higher points achieved at the entrance exams. Mr. Dov Levy, deputy director of the orthodox American Endowment School point­ed out that understandably this school empha­sizes religious education. Students start the day with prayer, and three times a week they study Hebrew language and Judaic studies (including the whole of Jewish culture). 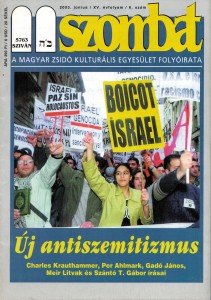