The October issue of Szombat begins with a study by Gábor Ács, probing the sensitive issue of how the Hungarian Jewish community was barred from German compensation owing to the four decades of Communist dictatorship. Ács notes that a new agreement has been reached between the Conference of Jewish Material Claims Against Germany and the German state and, as a result, individuals who have not received any compensation or have only received a fraction of what would be entitled to can, as or 1995, claim and receive a monthly allowance – this being a reasonable frame of reference for Hungarian Jews with similar claims.

As regards the Hungarian Jewish Restitution Fund, negotiations between the Hungarian government and the various Jewish organizations of Hungary are encumbered in part by the lack of cooperation between the Jewish organizations and, in part, by the fact that the proportions and scope of the material claims at the centre of these negotiations have still not been appraised, as well as by the vagueness shrouding the intents of the Hungarian government and of the World Jewish restitution Organization.

Similar difficulties beset the Czech Jews, who often find it difficult to prove their former title to the buildings and properties they are now trying to reclaim. Rabbi Ervin Birnbaum, the former director of the Paedagogium of Budapest, devoted two years of his life to organizing Judaic studies in the Sub-Carpathian region (in the Ukraine) a major element in the efforts to revive the Jewish community there. In his interview given to Adam István Rónai he expresses his concern as to how this work will be continued after he leaves. A report by a local journalist, Mária Váradi reveals the struggle for reviving the life of the tiny Hungarian Jewish community in Marosvásárhely (Transsylvania).

In an interview given to Judit Bokor, Elan Ezrahi, director of the Diaspora Section of the Melitz Institute in Jerusalem voices his belief that ties with the Diaspora communities all work to strengthen Israel. Morán Haynal, a graphic artist currently residing in Israel, who made aliyah from Hungary, speaks to Zsuzsa Schőner of the unique influence his Settlement in Eretz has had on his artistic vision. The October issue of Szombat is illustrated by his graphics.

In this issue we have included Jacob Sloan’s essay, “Saying Kaddish” – how one navigates the difficult path from the hollow custom of reciting the prayer, often from a feeling of duty, to a perceptive need, to “the love of the language of faith”.

We publish the final part of study on the 1944 history of Pest ghetto, and we also include a selection of comments, often highlighting particular details, by our readers. Ferenc Gáspár evokes the sufferings of the members of the Jewish Forced Labour Corps. László Remete, chief librarian of the Rabbinical Seminary, recounts the ordeals of the over 3000 books coised by Adolf Eichmann that have recently been returned to the library. We publish excerpts from Ágnes Rapai’s new novel, Stories of my mother, also included are reviews of the concert given by the Israel Philharmonics and some recently published book. Our cover photo shows the Jewish Community Centre, scheduled to be opened on October 16. 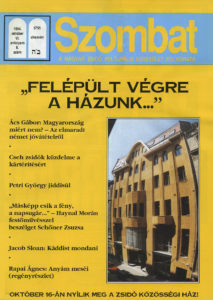