Unlike in Western Europe, issues related to the Middle East crisis have not triggered serious debates so far in the Hungarian left­ist, not anti-Semitic press. In the last few weeks two well-known writers have com­mented on the topic. György Kozma reflects on their debate. “Yes I do under­stand Imre Kertész’s sigh of surprise to feel relief at the sight of the star of David on tanks and not placed on himself. Yet I under­stand István Eörsi’s arguments about the apparently aggressive Israeli retaliation, because few are those Jews who would not want to avoid unnecessary bloodshed against the Arabs who otherwise have numerical superiority.”

This month’s cover story is a study written by Kornélia Papp: “Germans and Jews after the Holocaust”. The essay examines the most important conflicts of the last fifty years from Rolf Hochhut and Ernst Nolte, Werner Fassbinder and Martin Walser to today’s political events. As an illustration to this study we publish Martin Walser’s writing: “Auswitz without an end”.

In our section dedicated to women’s issues (Esther’s Bag) Borbála Juhász writes about “a group of Jewish women born in the 1870s and 80s, who were actively involved in feminist politics. Working in associations, and with their publications or just their view of life they supported the cause of equal rights: they were the advocates of emanci­pation and of the feminist movement.”

In the same section we publish an interview with Edith Bruck, a Jewish Hungarian writer living in Italy. “There never has been anti- Semitism in Italy of the kind that has appeared in Hungary or Poland. Although it comes from the same stem here as well: Christian culture seems to provide a good soil for the seeds of anti-Semitism. And this is the case everywhere, not only in Hungary. Perhaps the most important virtue of Italians is that they never take anything too seriously.”

In our Israel section we publish a transla­tion of a study by Professor Daniel Pipes: “The Islam claims on Jerusalem”. A report by Gábor Szerényi tells us about the author’s experience as some sort of a Hungarian Svejk in the Israeli army where he spent three weeks through the Shar El pro­gramme.

A story by Markas Zingeris, a Jewish writer from Lithuania gives the reader an account of his father’s experience of the Second World War. 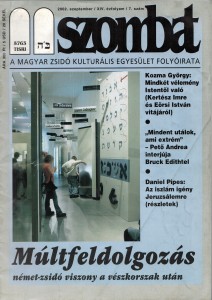