“Representatives of the Jewish community have been unable to act effectively for the community: under the socialist government they were inhibited by their loyalty, and during the following right-wing rule it was their fear refraining them from acting. They didn’t claim due com­pensation for the survivors of the Shoah, legal sanctions against anti-semitic hate speech, and that the Jewish community and culture should become part of the coun­try’s public discourse in its own right, as one of the ancient sources of European civilization, because of its intellectual and moral merits and political significance, not only as an inheritor of the Holocaust, “-in his edito­rial Gábor T. Szántó sums up the Jewish community’s last ten years and challenges ahead.

In our summer issue’s supplement „Europe and the Middle East” György Tatár comments on the attitude of liberal leftists towards Israel: „Since anti-Semitism attacks individuals as a „fictitious” collective identity, it is immoral and unacceptable. Because anti-Zionism attacks a „fictitious” collective identity, and apparently not individuals, it is to be approved of. This explains the origins of vulnerability of leftist and liberal thinking in the face of hatred against Jews focusing on Israel. Modem western liberalism is actually the continuation of the Enlightenment through new means: emancipation was offered in exchange for giving up a collective identi­ty at the time. The philosophy of the Enlightenment con­siders collective Jewish identity as a medieval and unen­lightened idea, and it tends to look at Israel from the same perspective.”

László Seres reports on a disappointing exchange of letters: „l sent the following letter to three organizers of the anti-Israel campaign in Europe:” Dear Sir, as a Hungarian Jew I protest against the anti-Semitic action called „a cultural boycott against Israel”. This reminds me of a German politician in the nineteen thirties who initi­ated the boycott of Jewish shops. We have seen the out­come.” One of the three, James Hughes, a British pro­fessor replied promptly: ‘This means that the moves of the Israeli army in Jenin will have reminded you of the day when the Waffen SS overthrew the Warsaw Ghetto Uprising.” In my reply I explained professor Hughes that I was a journalist and I asked him for a permission to pub­lish his letter as a typical example of anti-Semitism of left­ist academics in the West. I was given the permission.”

Attila Novák writes about a strange incident: the European Association for Jewish Culture had supported two Hungarian artists who displayed their works in a gallery in Budapest. The owner of the gallery refused to list the Jewish organization among the supporters. A snapshot from Budapest from the last days of the right wing government.

One of our authors publishes under the pseudonym „Moyses”, assesses the Jewish programme of Duna TV, the only Hungarian satellite television channel. The pro­gramme prepared under the auspices of the Official Jewish Community „reminds of the Kádár era in its style: it avoids topics (compensation, contemporary anti- Semitism, and the use of public funds in the Community), that would be critical towards Jewish and non-Jewish authorities.

Márton Csáki reports about the usual events at the assembly of the Federation of Jewish Communities in Hungary: the optimistic report presented by the man­agement is followed by critical remarks by the delegates claiming that the financial report is not clear and that the management’s political actions are careless. The man­agement listens to these remarks politely and then noth­ing changes.

In our „World” section Jaques Attali’s new book is in focus. He writes about very hot topics: Jews, Christians and money.

We publish an interview with István Szabó film direc­tor about his new film, Taking Side. „If we try to think about the events of Hungarian history between the sec­ond half of the 19th and the end of the 20th century, again and again we will face those problems that deter­mined the life of Hungarian Jews. What I want to find out is what was done by history, by politicians and ideology in the region where we live. When I deal with the ques­tion ‘What has been done to people in Central Europe, especially Hungarians?’ I always come across stories that I need to retell and where the heroes are Hungarian Jews. The interview was done by Tamás Halász.

In our women’s section ‘Esther’s Bag’ Katalin Pécsi interviewed an American author, Pearl Abraham whose novel „The Romance Reader” was published recently in Hungarian. Katalin Pécsi claims, „This is the Jewish novel that we have been waiting for so long. It gives us a very authentic, sincere and touching report about the everyday life of a traditional Jewish community. And what is more, the book is a “feminist story”: we get to know the life of a Hasidic family through the eyes of the eldest daughter, Rachel, we can hear the story told in her voice.” 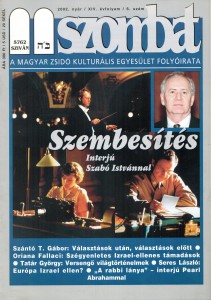