The February issue of Szombat includes the full text of the agreement between the Hungarian government and the Jewish Com­munity. This agreement is of major signifi­cance since the last such agreement was concluded in 1950. The agreement has been strongly criticized by Béla Hirsch, according to whom the “unique problems of Hungarian Jewry are not reflected in this text – these include the still unresolved issues of com­pensation, of which a rough schedule should at least have been included.”

A census of the Hungarian population will be taken in February, 2001. Psychologist Fe­renc Erős, historian Ágnes Gereben, socio­logist András Kovacs and political analyst Péter Kende share their views on two ques­tions that are included in the census questi­onnaire: religious affiliation and minority sta­tus. Péter Kende believes that the fears of Hungarian Jewry in ‘admitting’ their Jewish­ness are wholly unfounded.

Etgar Keret is a 33 years old successful Israeli writer. In the interview given to Szom­bat he expresses the views of his generation and also speaks of his personal political cre­do: “Most Israeli writers are rather ideologi­cal, whereas I tend to be more pragmatic. Many Israeli writers have committed themselves to left-wing parties, but I have never cooperated with these. I am rather cynical when it comes to politics.”

Our column on female issues – written by women – discusses wigs, traditionally worn by married Jewish women. Included are in­terviews on this issue, an overview of the history of this custom, as well as a portrait of the single traditional wig-maker in Budapest.

In his study on the history of Agudat Jisroel in Hungary, Attila Novák offers an outline of the history of this organization between 1918 and 1940. This organization was origi­nally anti-Zionist, but under the influence of the anti-Jewish laws, it abandoned its ideolo­gical inflexibility and established contact with national Jewish movement.

In her essay entitled “Blood”, Viktória Lu­gosi writes about her mother, hospitalized in one of the best hospitals of Budapest, and her roommate, who first appeared to be an anti-Semite, but turned out to be Jewish.

János Gadó describes daily life under the intifada that broke out in the occupied terri­tories in autumn, 2000. Both the Jewish sett­lers and Arab citizens of the Gaza Strip tell their version of the events.

Also included in this issue is the second part of Ruth R. Wisse‘s essay on liberalism and the Jews. 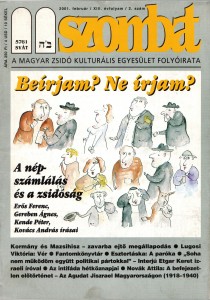