Hungarian government set up a fund for han­dling the property of those Jews who were killed in the war and left no family behind. The Fund never actually had any considerable prop­erty to look after and was soon made useless, though it never was closed legally. The unsolved problem of compensating Jews for their stolen properties had to be taken into consideration again in 1990 by a democratic Hungarian government. Finally in 1996 the Hungarian Jewish Heritage Fund was created, which as its founding document states was meant to revive the Jewish life in Hungary. At the start the Fund was given 7 properties of medium value, 5 paintings and 4 milliard forints (16.6 million US$) in compensation shares. Though the leaders of the Jewish com­munity thought the allocated property is dis­proportionately little compared to the value of the goods stolen from Jews in Hungary, but reluctant to delay compensation once again, they accepted the deal stating that they consid­ered this only as a start. The Fund has not been given any further property ever since. The 21 members of the Board of Trustees allocate the money coming in from the present properties of the Fund through tenders twice a year. The Board includes representatives from all impor­tant Hungarian Jewish organizations, from for­eign Jewish organizations and from the Hungarian government. This board is rather large, and clumsy, sometimes involved in petty debates, yet it is a democratic organization because its members representing diverse interests keep an eye on each other – writes János Gadó in his article about the Fund.

Szombat publishes the correspondance between the Sim Shalom reform Jewish com­munity and the Federation of the Jewish Communities in Hungary. Sim Shalom applied to become a member of Mazsihisz (the Federation’s Hungarian name), but the three leaders from this latter refused the request, referring to the rabbis’ halachic disapproval. The author of our article claims that the Federation ought to decide wether it has a halachic base or it tries to provide a political representation for the whole of the Hungarian Jewish population, but in this case the refusal could not be justified. A paradoxical trend seems to be prevailing among Jews around the world, points out one of our authors: while they have attained a political influence as never before, at the same time there is a demo­graphic crisis: the Jews of the diaspora are becoming fewer and fewer, while there are more and more non-Jews settling down in Israel, bringing ideological and political ten­sions. Károly Kókai tells us about an undiscov­ered period in György Lukács’s life. Lukács as a young man in 1913 was studying the issue of Jewish identity. He had read the contemporary works of the era on the subject writings by Herzl, Nordau, Buber. His sudden interest in the topic was brought on by his encounter with a beautiful young artist, Yelena Grabenko.

A study by Miklós Szabó examines how the relationship of the communist movement to the Jews was represented in Hungarian films made after 1956. Urban professionals, and families from the lower middle class were to stand for Jews in these films where the problem was con­sidered as a taboo. Films made in accordance with the official attitude represented these peo­ple as unsteady, weak characters against deter­mined working class heroes. Antisemitism was preserved to the post 1989 period by the anti- Jewish feelings of the party bureaucrats. – believes the author. The author of the review of a book by Randolph L. Braham “Romanian nationalism and the Holocaust” sees faking his­torical facts and denying the holocaust are the new forms of political antisemitism. 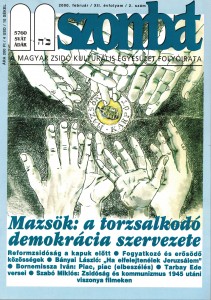 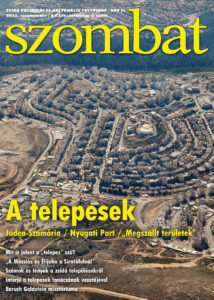