The February issue of Szombat begins with János Gadó’s article on the Federation to Maintain Jewish Culture in Hungary (our publisher) which in 1989 played a key role in the renewal of Jewish file. Since then, however, the federation has lost its former importance and prestige in public life, although it continues to function as a cultural organization. This is followed by a report written on the successive phases of restitution since 1990 and an overview of the Swiss-Hungarian negotiations between 1959-1975 conceming the bank deposits of the Hungarian victims of the Holocaust. Also included in our Home Affairs section are news of a recent ‘discovery’: a cache of art treasures has surfaced in Mizhni Movgorod originating from Hungary that was stolen from their Jewish owners.

In our section on Israel we offer an overview of the relation between the religious and non-religious, between Orthodox and non-Orthodox. The former focuses on the non-religious interpretation of Jewish tradition, which has gained actuality through the debate on the draft bili ‘Who is a Jew?’ proposed by the Shas Party.

In our Foreign Affairs section we publish accounts by Gábor T. Szántó and Dorottya Czuk of their visits to Rome, both offering an insight into an unusual Jewish community with its own special traditions that is in many respects far removed from the ‘mainstream’.

In our section on Jewish tradition we have included Professor Géza Vermes’ study on the interpretation of the sacrifice of Isaac. Professor Vermes argues that in contrast to the claims of Early Christian authors, the Talmudic interpretation of the Biblical story is based on authentic Jewish thought and is nőt an adoption of ideas from Christian thinkers. This essay is followed by Professor Géza Komoróczy’s laudatio, since profes­sor Vermes was awarded with the Vilmos Bacher memorial prize.

Alsó included in the February issue are excerpts from Edith Bruck’s novel and a short story by Giorgio Bassani, as well as a study from György Szegő on the fate of the art collection of Károly László, the renowned art collector. 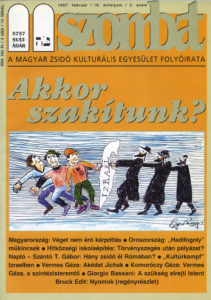 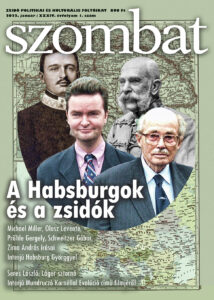