The February issue of Szombat begins with Éva Szécsi’s anslysis of the unexpected rise of Vladimír Zhirinovsky’s Russian extreme right-wing party, the underlying reasons, the possible consequences and, most importantly, whether there is reason to fear that this phenomenon might signal a more generál trend. Tamás Raj outlines the work of a group also a member of the Inter-Parliamentary Council. The Jewish Forum recently held its conference in Hungary: also present at this event was Hungary’s Foreign Minister, Géza Jeszenszky who expressed his conviction that the Hungarian goverment had done quite a lot for the Hungarian Jewish community over the pást three and a half years. Opposition MP Mátyás Eörsi disagreed with the minister, saying that although there were no explicit anti-Semites in the Cabinet itself, a palpable hatred of the Jews could often be felt in what he politely termed circles close to the Cabinet.

Two members of the recently re-elected presidium of the Cultural Federation of Hungarian Jews outline their views on the future of this organisation, and reveal the details of a draft law, under preparation that – if passed – would make the denial of the Holocaust a serious offence; they lament the lack of cooperation between the currently active Jewish organisations and also speak about the Holocaust memorials to be held this spring which, in their opinion, is far too… for their taste.

Included in this month’s issue is an essay by Jozef Hen, the renowned Jewish writer living in Warsaw, detailing the historical causes underlying the rise of anti-Semitism in Poland. Also featured are reports on the small Jewish communities in Iraq, Mongólia, Maroccco and China. We have ineluded statistics about the employment opportunities of new immigrants to Israel, as well as a report on the aclivity of Rádió Israel, the Israeli McDonalds chain and an overview of aborlion in Israel.

We have ineluded an article on the coming festivity of Purim. In tribute to Rabbi Joseph B. Soloveitchik’ s memory we have published excerpts from his major study, Halakhic Mán.

In our history section we offer an overview of one of the major Jewish papers of the Neolog communitympre-war Hungary, Egyenlőség, and of the activity of its editor-in-chief Lajos Szabolcsi, together with an analysis of the Jewish illusions, mistakes and major decisions of that period, the occasion being the publication of Szabolcsi’s memoirs. Also included is an essay by Rabbi Imre Hermann Schmelzer of Sankt Gallen and Gábor Schweitzer, who both discuss various aspects of the Neolog community, as well as the edited version of a paper read at a recent symposium, that had also been attended by József Schweitzer, director of the Rabbinical Seminary in Budapest and Miklós Szabolcsi, literary historian, as well as Gábor T. Szántó editor-in chief of Szombat.

In the cultural section we publish a short story by Benedek Várkonyi, as well as poems by Shlomo Tanni and György Péter Hárs, we have also included a review of György Tábori’s play, Jubilee that is currently on stage in Budapest.

This month’s issue is íllustraled by photographs taken by Ferenc Kiss and Éva Horváth of the Jewish communities and the remnants of Hungarian Jewry in Carpatho-Ukraine, accontpanied by ethnographer Miklós Rékai’s short text. 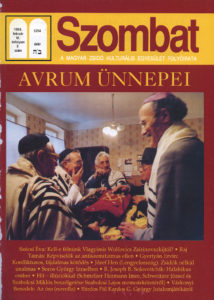