The June issue of Szombat begins with a report on the general assembly of the Jewish Community on which a decision was reached that Chief Rabbi György Landeszman, whose recently made outrageous statements stirred quite a controversy in Hungarian political life, should be relieved of his post. The report also includes an account of the economic transactions of certain leaders of the community that smack of corruption and that are incompatible with their post, and of the second jobs held by members of the rabbinical council, as well as of the problems surrounding the Rabbinical Seminary and the difficulties of the research into the history of the past forty years. The work of the Joint’s social fund for providing financial and moral help for the needy is described by two coworkers of the fund. Also included is a survey on the plans and aspirations of the students graduating from the Jewish gymnasium.

In this issue we have published an account by Yehuda Weinstock, a political analyst in Israel, on his research into the Central European roots of his family, which highlights hidden aspects of family history and the continuity of Jewish existence in Central Europe. This is followed by an interview with Rabbi Yossi Eisenberg, the editor of the Jewish programmes on French television. A review of recent events in Israel includes a report on Benjamin Netanyahu’s election and an essay by Natan Scharansky on the problems of unemployment among the Jews from Russia, as well as an interview with Meir Weiss, the renowned Biblical scholar; we have also included his study on József Patai, the legendary editor-in-chief of the pre-war journal, Múlt és Jövő.

The cultural section features with excerpts from György G. Kardos’ new novel, followed by an interview with the author in which he describes his years in Israel and talks candidly of his trilogy that has been translated into seventeen languages. This month’s issue is illustrated by the engravings of János Kass. 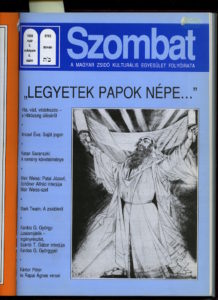