The cover of the March issue of Szombat is illustrated witli a photograph taken by Sándor Bacskai commemorating, for the first time in 30 years, a Pidyon Habben ceremony.

In his essay, ’Incessant awaital’, György Konrád, surveys the present situation, and possible future, of Eastern European Jewry. In an interview given to Gábor T. Szántó, the spokesman of the Jewish Comniunity, Péter Kertész speaks of the crying need for the intellectual capacity of Jewish intellectuals in the institutional life of religious Jewry. There is a lack a creativity and there is hardly any chance that the current leadership, with its antiquated mentality, will be replaced, or at least invigorated, in the course of the forthcoming community elections. The ’Home Affairs’ section also includes Éva V. Bálint’s diary and a detailed programme of the upcoming Day of Jewish Culture.

Our ’International Events’ section reviews the ongoing debate in the World Jewish Congress concerning a possible shift in the organization’s orientation. We have also included a report on a video-archive based on interviews with survivors of the Holocaust created by Steven Spielberg. Also included is a selection of vintage Yiddish jokes on the occasion of Purim.

In an interview with Joel Alon, the Israeli ambassador to Budapest, our colleagues, János Gadó and Emil Várai, inquired about the peace negotiations in Norway and about the World Jewish Restitution Organization.

We also publish the second part of Gyula Zeke’s sudy on the political activity of Hungarian Jewry between 1895 and 1919, in which special emphasis is laid on the Zionist movement and political anti-Semitism in Hungary during that period.

We publish excerpts from Pál Bárdos new novel, and Stuart Schoffman’s review on a collection of essays, ’What is Jewish Literature?’, published by the Jewish Publication Society. In a brief article the Hungarian Jewish Musicological Research Group outlines its research objectives and strategies.

The March issue of Szombat is illustrated by László Kallus’ cartoons, who has recently received an award from President Árpád Göncz for his life’s oeuvre. 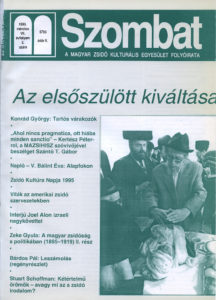