In our June issue, two of our colleagues publish analysises of the parliamentary elections and their consequences in Hungary and in Israel. “In the April of 2006 the elections created a situation which changed the stabilizing force of the Hungarian political system alto­gether. It was the first time that government parties managed to win despite the fact that during their four-year term they went through serious crises, changed the Prime Minister, and failed to show a succes story” – writes Attila Novák.

János Gadó examined the events in Israel: “Through the eyes of a (Central)-European person it is difficult to interpret the results of the elections in Israel: the Palestinians voted for an organization which aims to destroy Israel, like the President of Iran, trying to put together a nuclear bomb in a country with a population of 70 mil­lion people – and hardly more than a quarter of Israelis voted for the more fierce Likud and the two other parties more to the right.”

Agnes Heller wrote about Freud on the 150th anniversary of his birth: ”The same can be said about Freud as about all great discov­erers. Almost everything he said had been known here and there beforehand, but he was the one to connect all these elements into uniform and coherent theories. His genius consisted of three things: intuition, the ability to explain his thoughts, and the passion coming from his belief in being right.”

We continue our series presenting young Jewish leaders with two interviews by Márton Csáki. The creator of an alternative Jewish website – www.judapest.org Brunó Bitter, referring to himself as the “Jewish blogger” said: “Some of us are “somer Shabbes” Chabadniks. others are anticlerical libertarians. Reading my notes, a friend once called me a “L’art pour fart Jew” – it sounds funny, yet it is true. ’’

Dávid Kaposi, editor of www.pilpul.net said: “There are many, not specifically Jewish intellectuals trends, problems surrounding us – the movements criticising globalism, environmentalism, glob­al warming, feminism – which all need to be discussed. We are not too good at this type of progress yet, the “Jewish character” as such is – for the moment – dominant. ”

We interviewed András Kepets, director of Ulpius Ház, one of the most successful publishers in Hungary. Kepets, who was once a stu­dent at the rabbinical college, described the selection of books they publish: “Some of our publications are popular among the intelli­gentsia and we – of course – have a strong “Jewish line” targeting Jewish readers and those who are interested in related topics. Plus we publish books fora wider audience as well…”

We start a series of interviews with members of the business world: the first in the series was done by Adrienne Salgó who interviewed Gábor Bojár.

A report – German literature in Budapest – presents four German authors who were guests at the Budapest Book Festival. One of the guests was Aly Götz historian, dealing with the Holocaust (co-author of “The Last Chapter”, together with Christian Gerlach). In an interview to Szombat by Judit Beszterczey, he said: “The local national forces, the administration and the Christian majority did not cooperate with the Nazis because they wanted Holocaust as it is understood today. They only wanted to get rid of the Jews living near them, and they did not care where they get taken.”

“A community’s press coverage will be the same as the com­munity itself is the title of our report on a conference organized by Joint in April with the participation of Central and Eastern European journalists.

In our series presenting the Jewish communities in new EU member states, Péter Szegő describes the community in Bratislava.

We publish a section from a novel by Lea Polgár, from the book called “Ella on the Ceiling”. 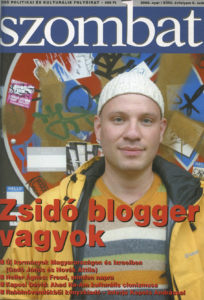