János Gadó’s editorial deals with the elections in Hungary: „The political right wing in Hungary has stirred and – as for anti-Semitic views – it is carefully starting to disconnect from the extreme right which – along with its traditional version – has acquired an updated version of anti-Semitism. The political left is still busy considering economic concerns, and with the excep­tion of the now insignificant Communist Workers’ Party, it is not receptive to that ultra-leftist, anti-West radicalism, which spreads the new anti-Semitism beyond the river Lajta.”

In a series under the title ..New faces”, Szombat introduces young Jewish leaders: András Büchler and Ákos Nagy, as well as two young rabbis (Zoltán Radnóti and Tamás Verő) through interviews by Márton Csáki and Adrienne Salgó. Within the Jewish community in Hungary there are more and more of those people in their twenties, thirties, who are willing to take up vari­ous positions, yet this will not necessarily bring a new momen­tum into the community. Rabbi Zoltán Radnóti said: ”I believe that the synagogue needs to retain its central position, it is a place where people enjoy being together, and the need to prac­tice the religion will arise in them. There is usually 60 to 70 of us together on Friday nights. A few weeks ago a guest cantor came to visit and he was surprised to see the community praying and singing together. Naturally, because we are doing it all together we have the Talmud Torah and we study together. I have set myself a goal: every month I plan to invite a new person to join us. So far I have managed to do so.” Ákos Nagy, program coor­dinator at Bálint Ház (Jewish Community Centre), leader of the Zionist organization. Kidma, claimed: “We are struggling to sur­vive, preoccupied by basic problems. The condition to become independent is not that we cannot accept money from the Community, but this should not be our main income. ”

Ágnes Heller, philosopher, wrote about the tipology of the Holocaust trauma: she examined its partially different effects on different groups of survivors: children and older people.

András Petőcz wrote a report-essay on the recent riots in France.

We publish an interview with György Spiró, one of the best known contemporary writers in Hungary, who perhaps has never before talked so extensively about his Jewish identity. ”I am not an ‘assimilating’ Jew – to use another „horrible” word – but a Hungarian. Time to time there is someone pointing a fin­ger at me for being Jewish, than he gets excluded from the Hungarian literary circles, but this is not a question of my iden­tity, this is a question of the Nazis ’ identity, their problem.”

We publish a short piece – “Ancestor worship” – from 1897 written by Achad Haam.

Szombat has done a sociological survey among graduates of Jewish schools. In this month’s issue we publish the second part of János Gadó’s study interpreting the results of this survey. 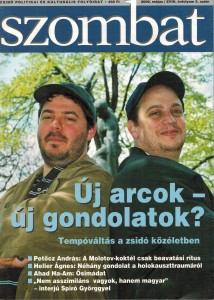 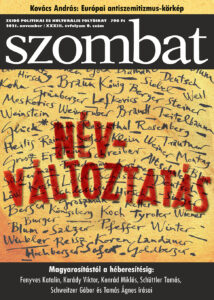