In his essay “Europe and Israel” the writer György Konrád dis­cusses how modern Europe needs to be responsible for the reborn Jewish state in the Middle East, and puts the question: “The most recent changes, the radical way of thinking of the new Iranian presi­dent, the electoral victory of Hamas, the almost certainly coordinat­ed frenzy prompted by a couple of cartoons in a Danish paper, all make the observer wonder whether the political hysteria outside and inside the fence is the same as the one which claimed the lives of tens of millions of victims, and which seems to quiet down for one gen­eration and then flames with new fervour again?”

Parliamentary elections will be held in Hungary on 9th of April. We would like to offer an overview of the political scene by pub­lishing interviews with leaders of the four parliamentary parties at present. Károly Herényi (Hungarian Democratic Forum), Gábor Horn (Alliance of Free Democrats), Imre Szekeres (Hungarian Socialist Party) and Zoltán Pokorni (Fidesz-Hungarian Civil Alliance) were asked the question: “What does your party offer to the Jews?”, and they also spoke about their respective party’s policy relating to the Middle East and to the Jewish slate. Gábor Horn, polit­ical secretary of the Prime Minister’s office explained: “The series of United Nations resolutions condemning Israel is a genuine exagger­ation, an obvious consequence of the impossible situation created by the majority votes of third world – especially Muslim – countries.” Ágnes Heller discusses the new book by Amos Oz.

For the first time in the history of the Federation of Jewish Communities in Hungary (Mazsihisz) since 1989, one of the member communities announced that they are leaving the Federation. In the report of János Gadó the chairman of the community in the town of Keszthely, István Goldschmied claims that one of the reasons for the move was the fact that in 2001 the Federation put all the community’s real estate properties under the Federation’s name – without consult­ing or informing the community. Six months later, the properties were returned to the Keszthely community – after their chairman menaced with legal procedure. According to Oszkár Egri the Federation’s lawyer however, the move was caused by some technical failure and annulled immediately after receiving the claim about it.

“A change of system is needed – Zoltai needs to go” – wrote Peter Szegd in his comments on the occasion of Gusztáv Zoltai’s decora­tion for his merits in the 1956 uprising, however Zoltai, the manag­ing director of Mazsihisz (Alliance of Jewish Communities in Hungary) joined the Workers Guard, the Communist party’s elite armed unit in 1958. Szego also criticized the ”feudal” system that – as he claims – was created around him in Mazsihisz in the last one and a half decades.

Pál Várnai interviewed Ákos Kertész writer. The author said about his excellent novel. Makra: “Jews today, I hope, refuse to and cannot assimilate. The task of the Diaspora is to integrate into Hungarian society while keeping their Jewishness and passing on their cultural and moral values.”

Attila Novák wrote a review on Spielberg’s film. München, while Judit Beszterczey examined the film’s international reception by the media. Novák says: “The perspective of the film is interesting because it shows the paradox tragedy of surviving and finding a place on the Earth through bloody sacrifices and that in this struggle it is impossible to remain clean.” 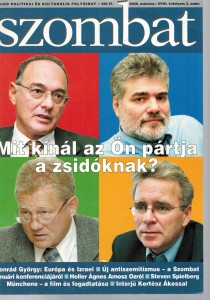 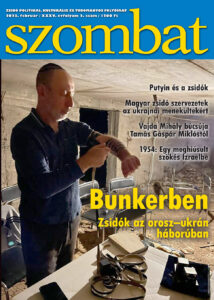