Our editorial deals with the challenge represented by Hungarian citizens who want to be represented as Jewish nation­al minority; by the Jewish Community Forum (Zsidó Közösségi Fórum), and by the new religious community: United Hungarian Jewish Congregation (Egyesült Magyarországi Izraelita Hitközség), led by Chabad rabbis. The editorial asks whether the autarchy of the Alliance of Jewish Communities in Hungary (MAZSIHISZ) as a sole official representative organization of the Hungarian Jews will come to an end, and suggests to the leaders of Mazsihisz to discuss the questions of representation with other Jewish organizations.

There has been a lot of upheaval caused by the fact that “a few Hungarian Jews contacted the National Electoral Committee in order to start collecting signatures of approval to recognize the Hungarian Jewish community as an official national minority. To be able to do this the signature of a thousand citizens – as well as a number of other conditions are required by the Hungarian law on national minorities.” We publish a selection of arguments for and against this proposal. We interviewed the Jewish activist. Gábor Deák, one of the initiators of the idea, and we publish MAZSIHISZ president Péter Feldmájer’s negative statement about the issue (as quoted by the national News Agency), and András Kovács sociologist’s view on the question, who points out the deficiencies of the law on national minorities and the potential problems of legitimacy of a similar representa­tion. We publish a report about the Jewish Community of Sweden – where the Jewish community counts as a national minority, and this situation does not present any problems.

We report on the Jewish Community Forum held between 17 and 20 November, dedicated to the dialogue between different Jewish organizations and trends. At the event Ágnes Heller philosopher – along with many other participants – stressed (more emphatically than ever before) that “the autarchy of MAZSIHISZ is bad for the Hungarian Jews.”

Zsuzsa Shiri’s article deals with the increasing problem of the Israeli maffia: “for a long time now the presence of orga­nized crime, its connections with the highest circles, corrup­tion and bloody revenge, gangster wars and the involvement of the police has not been questioned. The issue is: when will all this reach a level where people in the streets are affected by the world of criminals, when the average citizen gets involved.”

Zsófia Polgár, the famous chess player living in Israel explained – in an interview to Zsuzsa Shiri – that the reason why she does not play for Israel at international tournaments is “because if I play, I play for Hungary, because to me, chess will always be connected to Hungary.”

“Our traditions are collapsing, and using broken pieces we are trying to describe this collapse. The main hero, Ádám Koren fails to put anything together. He encounters reminders of the past, then he gets to see that certain photo, in which he knows practi­cally all the people, but then he does not think of visiting and talking to those still alive. This is a book about the failure to understand the history of one’s ancestors” – said Pál Závada writer in an interview to Gábor T. Szántó about the his most recent and popular novel, The Photographer’s Legacy (A fényképész utókora).

In our supplement we publish a major survey carried out by our colleague. János Gadó sociologist, about graduates of dif­ferent Jewish schools in Hungary. The study examines – from a normative and from a Jewish point of view – the opportunities and talents of the graduates of the three schools. At the same time Gadó also looked at the three Jewish schools in comparison with two secondary schools in Budapest where the ration of Jewish students is traditionally higher. A series of interviews with the principals of the schools in question concerning the sur­vey is also published in this issue. 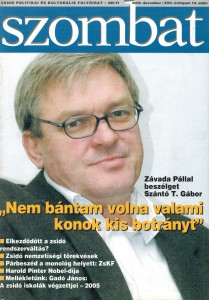