The September issue of Szombat begins with the first part of Gábor T. Szántós essay, Reflections on Israels 50th anniversary from the Diaspora. The article reflects a view that has much in common with Halakhic ideas: secular Israel is only one part of the Jewish world which is only encompassed in its entirety by Jewish tradition.

In September classes will begin in the new building of the gymnasium maintained by the Jewish Community. Jewish education in Hungary has gained yet another school in which pupils can move from kindergarten to primary school to gymnasium. The tasteful, but not too large building of the school is described by architect György Szego. In our commentary on the school, Emil Várai writes about the controversies surrounding the building itself: the new building was constructed in the park of the Jewish Hospital, even though there would have been a suitable plot elsewhere; there was some suspicion concerning the tender for the construction which was won by one of the construction firms which has since long had business contacts with the Jewish Community.

The Hungarian Jewish Heritage Fund which manages the restitution paid to the Jewish Community by the Hungarian state has brought its first decisions on the applications handed in for funds. A total of Ft 40 million (c. $3.6 million) were granted to various projects. The next round of decisions will brought in September, 1998.

Nehemia Aloni, an Israeli scholar visited Budapest in 1954 to study the Jewish books and the books on Jewish themes in Hungarian libraries. His memoirs offer a unique insight into Jewish community life and the rivalry between Sándor Scheiber and Erno Róth, the then two leaders of the Rabbinical Seminary. Alexander Scheiber tried to enlarge his personal maneuvering space based on his international renown as a scholar. His privileged situation enabled him to travel abroad, but he did not consider emigrating to the West. According to Aloni, Scheiber and Róth both considered Hungarian culture and Jewish tradition to be an integral part of their personal heritage.

Followers of a US-based movement, the Messianic Jews, began their six-month Hungarian campaign with a three-day programme which attracted several thousand visitors. The programme was organized in a thoroughly American fashion, amidst much propaganda fanfare. Most of the visitors came from pro-Jewish Christian evangelic movements, and very few Jewish converts were to be seen. The Hungarian Jewish Community protested over the activity of the Messianic Jews, their main objection being the misleading propaganda (Festival of Jewish Music and Dance). Rabbi Tamás Raj highlights the Jewish standpoint ragarding the Messiah: the Messiah is to come into this world, the salvation is to take place in this world.

A DM 1 million grant from the Niermann Fund (Germany) will be used for renovating the premises of the library of the Rabbinical Seminary. The Hungarian Judaica collection housed in this library is unique, but it has been badly neglected during the past decades and its condition has also deteriorated.

A police investigation is now conducted concerning the false invoices over renovation work in the Jewish cemetery, about which we wrote in earlier issues. The leader of the cemetery also lost the libel suit it brought against Szombat. 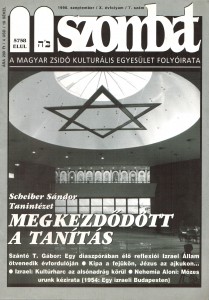