In the September issue of Szombat we publish the second part of Gábor T. Szántó’s essay, “Reflections on Israel’s fifti­eth birthday from the Diaspora” in which he reviews the elements that have shaped the attitudes of Diaspora Jewry to Israel.

The assembly of the board of the Hungarian Jewish Heritage Fund, scheduled for September, was again postponed owing to the absence of several board members. The agenda of the board included decisions on the remaining grants for 1998. The Israeli members of the board voiced their dissatis­faction over the recurrent absenteeism of Hungarian board members.

Hungarian Holocaust survivors – of whom over one hundred die each month – can hope for four types of compensation: (a) The human­itarian fund set up by Swiss banks has already paid $500 and the payment of the second $500 largely depends on how compensation payments proceed in Eastern Europe, (b) The DM 80 million humanitarian fund approved by the Bundestag will cover the DM 500 paid to survivors, and the additional DM 500 to be paid to those whose name occurs in the German documentation of former camp inmates or in the survey made by the Red Cross after the war. (c) The Claims Conference and the German government have agreed that a DM 200 million fund should be set up and a monthly payment of DM 250 be issued to those survivors who have spent at least six months in a concentration camp or eighteen month in a ghetto or in hiding. About six to seven thousand of the twenty-five thousand Hungarian survivors can claim this monthly payment (d) According to the Hungarian com­pensation laws persons who were “unlawfully stripped of their lives or of their freedom” between 1939 and 1989 are entitled to receive compensation. However, deported Jews (or their heirs) have still not received anything. The leaders of the Jewish community have sug­gested a sum of Ft 300 thousand ($1500).

We also publish the second part of Nehemia Aloni’s memoirs, describing the Hungary of the 1950s – the absurd political system and its effects on the Jewish com­munity as seen through Israeli eyes.

Katalin Pécsi’s report describes the events of the Jewish Cultural Festival in Budapest which were primarily targeted at visiting tourists.

A sociological study of Hungarian Jewry, based on a representative sample, will be launched this year. This work will be co-ordi­nated by András Kovács. The results of the survey will be published in about two years.

Rabbi Baruch Oberländer has launched a yeshiva in Budapest. 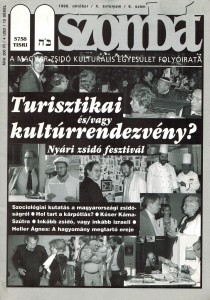