This issue of the Szombat can easily turn to be the last but one  states Gábor T. Szántó in his editorial. Three Hungarian foundations, supporting our periodical until now, unexpectedly stopped funding the Szombat, what put us in a lethal danger. They might have thought, that the recently Hungarian Jewish Heritage Foundation will solve our problems. However our magazine, highly critical towards the Hungarian Jewish establishment can not at all be sure of the support of this very same establishment, what gives the majority in the board of the foundation.

In his diary István Gábor Benedek reflects on the problem of the Jews, who  as high ranking officers or employees of the communist regime  committed heavy crimes against innocent people. The Jewish community should find an adequate interpretation of this problem  the author proposes.

An active participation in human rights and (recently) minority rights movements is a good old way to substitute the Jewish identity  states János Pelle in his contribution to the debate on assimilation-dissimulation. However this response to the Jewish question should be surpassed  by strengthening our Jewish knowledge and consciousness.

The Yiddish language, once the bearer of a highly developed secular culture is turning into the communicational mean of a deeply religious community which is rather insensitive towards the outside world. This is the conclusion in the second part of our Yiddish supplement (edited by Vera Szabó), in which we try to describe  by citing data on the publishing of Yiddish books  on which areas the Yiddish has remained a still living tool of communication.

In his short report Péter Kertész expresses his doubts about the promises of the official Jewish Community concerning the construction of the new Jewish School. 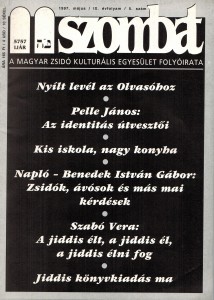