According to new Hungarian legislation in 1997, taxpayers could channel 1 per cent of the income tax to various social organiza­tions. A total of 8 million taxpayers chan­nelled about Ft 2 billion (10 million USD) to various causes. In her report, Fanni Hahn found out that various Jewish organizations received about Ft 4 million (20 thousand USD) in this way.

The Swiss fund for needy Holocaust Survivors has begun the distribution of 400 USD for each Hungarian survivor of the Shoah. A small ceremony was held to cele­brate the occasion, and those present were told that there will be a second round of compensation once each and every Eastern European survivor has received his/her 400 USD. This will take some time since many Jewish communities in Eastern Europe have still not prepared their list of survivors.

Our article on Israel focuses on the Jewish immigrants from the former Soviet Union who form a strongly individual community, preserving many of their traditions from their former homeland.

In his article, “Hypocritical Pharisees?”, Tamás Visi documents – on the strength of evidence in Jewish and Christian sources – how a false picture of the Pharisees became rooted in Christian society; of how literate and learned men came to be identified with insincerity and hypocrisy.

Tamás Bíró offers a critical review of the new prayer-books published by the Lubavitch in Hungary.

Finally, we have included Iván Sanders’ book review of Mária Földes’ novel, The walk. The authoress from Transylvania in Romania (who committed suicide in 1975 in Tel Aviv) led a doubly minority existence as a Hungarian Jewish writer. In this novel she describes her exclusion from society and her eventual deportation. 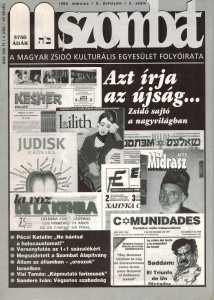